When I was growing up in Nepal, I heard stories about the mighty tigers ruling our country’s forests, and the elusive snow leopards that roamed high up in the Himalayas. These tales evoked awe in my young mind. I was so entranced by the majesty of the “king of the jungle” and “queen of the mountains” that I devoted my life to studying them. 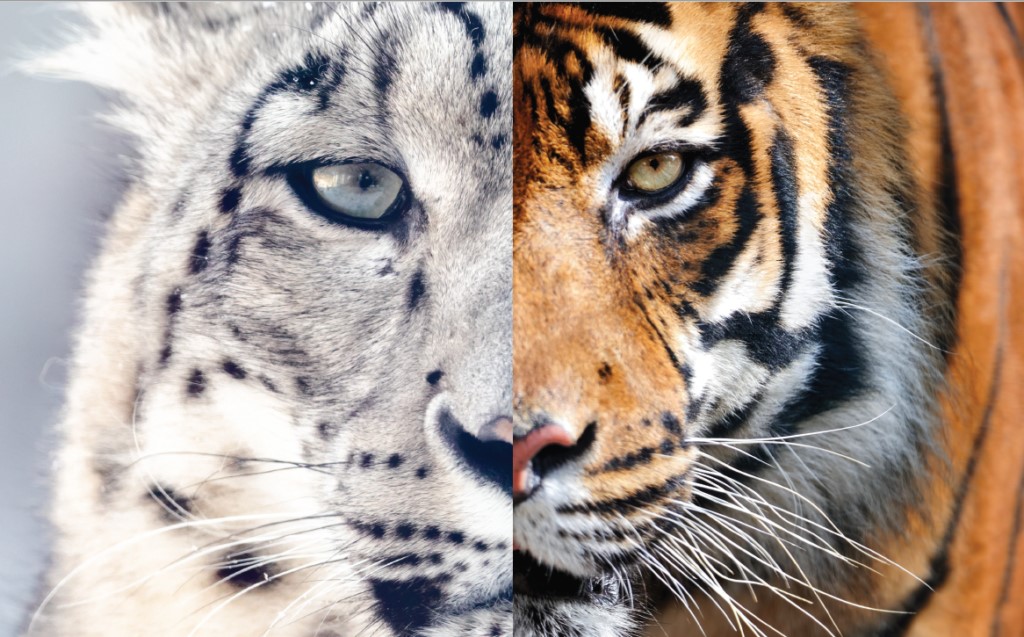 Over the years, I’ve tracked tigers and snow leopards throughout Asia. What has always amazed me is how perfectly suited they are for their environments — the snow leopards’ long tail, thick body coat, snowshoe-like paws, large nostrils, stout limbs and short ears all have a specific role to play in surviving one of the harshest regions of the world. The tigers’ size, stripes and ability to conceal itself and ambush prey makes them a superior predator wherever they roam.

But even their physical strength and evolutionary advantages are no match for a threat like habitat loss.

No longer the rulers of their domain

Big cats and people have lived alongside one another for millennia but this existence hasn’t always been harmonious. Both tigers and snow leopards are seeing their kingdoms shrink and they’re increasingly competing with humans for space.

Just over a century ago, approximately 100,000 tigers roamed across Asia. Due to a mix of persecution, habitat loss and a decline in prey species, today a mere 3,900 tigers survive on less than five per cent of their historic range.

About 40 per cent of the forests and natural habitats that tigers called home have been lost in the last decade alone, leaving populations fragmented and isolated.

It’s believed there are about 2700 to 3400 mature snow leopards in the wild but there is still so much we don’t know. To date, only three per cent of their range has been systematically studied, which poses a challenge for conservation practitioners like me. Despite its remoteness, development from roads, shifts in traditional herding practices, mining, and new settlements are all fragmenting the habitat snow leopards need to hunt and reproduce.

Recently, tigers have been found roaming in the high mountains of Bhutan, India and Nepal.  And last year, tigers in Nepal broke altitude records twice, with camera traps capturing them at 3,165 metres! In Bhutan, they have been seen in altitudes over 4,200 metres, thereby sharing part of the snow leopard’s range.

This finding could indicate climate change and human disturbances in lowlands are pushing tigers northwards; a shift that could lead to competition with snow leopards and more conflict with communities.

Although nicknamed “king of the jungle,” tigers are highly adaptable to a range of habitats —from tropical forests to wetlands to snow-covered mountains and grasslands. It’s also possible that tigers historically lived in the mountains and are now returning as their populations grow and, at the same time, their lowland habitats become smaller. Biologists are actively investigating this possibility as well the impacts of climate change.

Most of all, it underscores the importance of protecting and restoring diverse habitats and the biological corridors that connects these habitat patches so that species can safely travel between them.

Long may they rule

That’s something my team and I in Nepal are doing with support from Canadian donors. Using cutting-edge technology like GPS collars and camera traps, we’re identifying the critical habitats that big cats desperately need now and in the future as they respond to climate change and human disturbances.

Big cats are prolific breeders — they can have as many as five cubs per litter — but they need large territories and abundant prey for their wild populations to recover. I know we can save Asia’s big cats for perpetuity if we could just make sure that they have enough room to rule and food to eat.

I hope you will join me in creating a thriving future for Nepal’s “king of the jungle” and “queen of the mountains” so that the stories which inspired me from a young age continue to be told about a thriving species, not a long-gone dynasty.